The Sun Symphony Orchestra has a charismatic French music director and principal conductor who is not only a graceful and enthusiastic stage leader but also a good communicator who attracts positive attention from audience of different ages.

Olivier Ochanine told Hanoi Grapevine about the art of conducting:

…With bad conductors, the problem might not be the stick technique or personality but that they do not trust the orchestra enough to let them play.

1. How and why you became the music director and principal conductor of SSO?

Actually, I had no plan to move to Vietnam at the time when I was contacted about the idea of the SSO. I was making plans to move to Berlin. However, when I was asked to build a new professional orchestra in Hanoi and after meeting members of Board of Director of Sun Group and Sun Symphony Orchestra, the project seemed truly remarkable, especially in an era when orchestras seem to be struggling to survive. The idea of a brand new orchestra that would incorporate Vietnamese musicians with musicians from many countries was a beautiful one. I’ve been very proud of the orchestra so far and am sure the SSO will lead the way for musical excellence for the next generation of musicians.

A new orchestra needs to build strategically and not to hurry. However, ideally the orchestra will perform abroad in the next five years as it gains quality and grows larger. The first priority is to perform in various corners of Vietnam and Asia, then followed by performance tours outside of Asia. My dream is to see the SSO become the crown jewel of Vietnam and to represent Vietnam everywhere, to become an iconic symbol of this wonderful country. Fundamentally, however, the mission is to inspire Vietnamese musicians and hopefully to gain more and more local musicians into the orchestra. We also aim to show our public that ‘Classical’ music is for everyone and that there is really something for anyone from all walks of life to be gained from experiencing live orchestra music.

3. What are the deciding factors of a good orchestra?

There are the technical factors – musicians need to have a command of their instrument, a solid foundation by which they can express themselves on their instrument. This is more of a physical need. An orchestra, however, needs good instruments as well. Acquiring good instruments for performance (especially string instruments) is one of the hopes I have for the SSO in the years to come. A big advantage this orchestra has is the energy that permeates within the group. The musicians are young and very enthusiastic. This is a very good aspect of a good orchestra on the psychological side; it helps a lot in the music making process. 4. You were trained as a flutist and bassist, do you play the instruments still?

Not anywhere as much as I would like! 24 hours in the day are simply not enough. I miss it very much and hope that somehow days become longer someday, but we all know that won’t happen.

Both have their pros and cons. They are totally different disciplines. What I enjoy about conducting is that it is a hugely holistic approach to music making. Conductors make no sound during concerts; we do not actually perform music. What we are responsible for is to enable our musicians to play as best they can and hopefully to inspire a performance wherein there is a certain synergy between the musicians and the audience. The best concerts are those where the energy between musicians and audience is electrifying. To a huge extent, this is dependent upon the conductor. It’s a big responsibility and I cannot say that I’m truly ever satisfied after a performance, but getting closer to that goal is always more enjoyable.

6. How do you describe a good conductor?

Conductors comes in many shapes and sizes, figuratively speaking. One good conductor can be very different from another. Some are good communicators, others are lousy at actually conducting but are amazing musicians to the point that the orchestra feels inspiration that lets them play well. The short version, however, is that a good conductor ENABLES. I often find that with bad conductors, the problem might not be the stick technique or personality but that they do not trust the orchestra enough to let them play. My goal (which I will always work on achieving even if I may not ever truly get there) is to conduct less and to show more. Less time beating and more demonstration of musical intention. 7. Who are your favourite conductors and why?

I have far too many to name. But I always enjoy watching conductors like Carlos Kleiber, Yuri Temirkanov and others who don’t over-conduct and really are the music during concerts. It’s inspiring to learn from conductors like these, to see how much can be shown with as little motion or drama as possible.

8. Who are your most favourite composers and why?

I love Tchaikovsky and Nielsen. Both for different reasons. Of course I love many others like Beethoven, Rachmaninoff and Puccini but really it’s a hard question to answer. In general, I do love the late Romantics – incredible melodic development, rich harmonic language and maximal passion.

9. Sometimes I see audience falling asleep during orchestra performances, what is your thought on that?

It depends. If they’re tired, I wish them a good nap. If they’re closing their eyes because they’re immersed in the music, then our job is achieved.

Thank you very much!

Written by Uyen Ly for Hanoi Grapevine
Photos by SSO 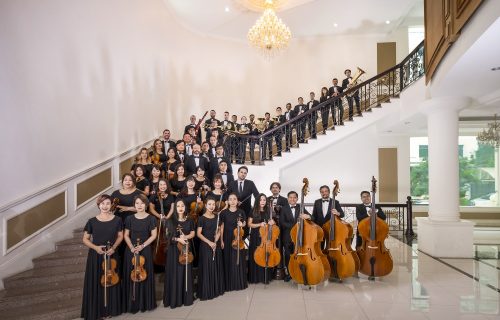